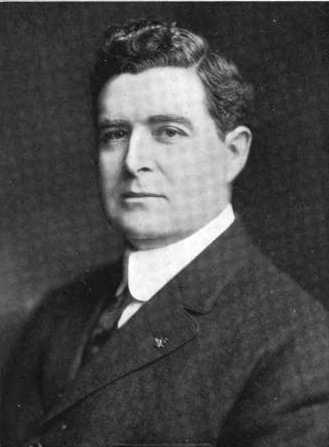 Portrait from the "Book of Prominent Pennsylvanians".

Pennsylvania yields another oddly named public figure in one Elgie LaVernze Wasson, a Butler County-based surgeon and businessman. A two term member of the Pennsylvania House of Representatives, Wasson served during the 1911-12 legislative term, a session which featured such interestingly named legislators as Artanus L. Snyder, Mandus Welles Reeser, Plymouth W. Snyder, Eckley Walter Klingerman and the venerated Hillorious Kester Bender (now there's a name!)
Elgie LaVernze Wasson was born in the city of New Castle, Pennsylvania on July 12, 1874, being the son of William J. and Samantha Jane Wasson. He would begin his schooling in the public school system of Butler County and was later a graduate of the Sunbury Academy. Following his graduation, he entered upon a teaching career and followed that vocation for three years before deciding upon a career in medicine.
In the late 1890s Wasson enrolled at the Baltimore Medical College and earned his medical degree in 1898. He continued study at Johns Hopkins University and after graduating in 1902 returned to Pennsylvania, establishing a medical practice in the town of Callery. Two years later he removed to the city of Butler, where he would continue to reside and practice for decades afterward.
Regarded as a "specialist in surgery and gynecology", Wasson served as head surgeon at the Butler County General Hospital and was also retained as head surgeon for the Baltimore and Ohio Railroad Company's Butler district. A member of both the Butler County and Pennsylvania State Medical Society, Wasson also made a name for himself in a number of business concerns, several of which were located in other states. For a period of ten years he actively engaged in the "oil producing business" and was a director of the Evershed Land and Improvement Company in Niagara Falls, New York. Wasson also served as a director and Vice-President of the Western Slope Copper  Mining and Land Company based in Colorado and for a time was affiliated with California Touring and Land Co. and the Sun Film Manufacturing Co., both of Pittsburgh.
Elgie Wasson made his first step into Pennsylvania political life in the late 1900s, winning election as Butler County's representative to the Pennsylvania State Assembly in 1908. He would win reelection two years later and during his four years in the house served on the committees on Banks and Banking; Congressional Apportionment;  Mines and Mining; Good Roads; Education; Military Affairs and Fish and Game. During the 1911-13 term Wasson chaired the committee on Health and Sanitation.
Little is known of Wasson's life following his time in the legislature. Regarded as a prominent club man in the Butler area, he was an active Mason and was affiliated with the Elks, the Oil Men's Carnival Association, and the Butler Country Club. Elgie L. Wasson died in Pennsylvania on June 13, 1931 of "pulmonary edema" and was survived by his wife Henrietta and a daughter, Joan (1917-2009).  He was later interred at North Side Cemetery in Butler, Pennsylvania.
Posted by Andy Osterdahl at 6:54 PM 0 comments 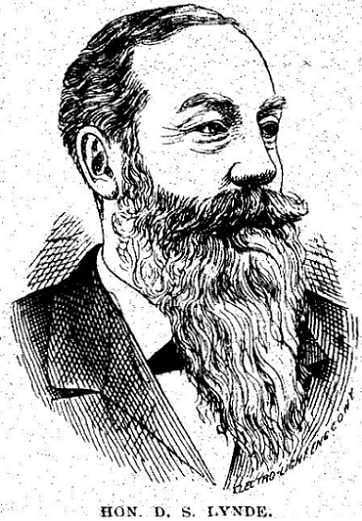 Portrait from the Watertown Herald, February 27, 1897.

Dolphus Skinner Lynde was for many years a political power player in St. Lawrence County, New York, being a four-term assemblyman and three-term state senator from that county. Mr. Lynde has been on my radar since locating his name via a New York Red Book way back in 2003, and for twelve years time no picture of him could be located (despite my best attempts at searching for one!) Earlier yesterday afternoon a newspaper print of him was (to my great surprise) finally located, via a February 27, 1897 edition of the Watertown Herald.
A life-long New Yorker, Dolphus Skinner Lynde was born in Antwerp, Jefferson County, New York on July 1, 1833, being the eldest of eight children born to Benjamin Franklin and Catherine Cheney Lynde. His education began in the common schools of Jefferson County and as a youth attended the Gouverneur Wesleyan Seminary. Early in his life he would take work as a bookkeeper under Antwerp iron manufacturer James Sterling, and remained in his service for a period of three years.
In the early 1850s Lynde left Antwerp and resettled in the town of Hermon, located in St. Lawrence County. Lynde married in Hermon in 1853 to Esther Caul (1837-1936), to whom he was wed for nearly fifty years. The couple would have no children of their own but would adopt a daughter, Grace Pauline (1872-1961).  Lynde's residency in Hermon saw him become a founder and stockholder in the Cooper's Falls Iron Works, and would accumulate a small fortune "selling goods, milling, buying and selling cattle and real estate."
Prior to 1864, Lynde pledged allegiance to the Democratic Party, and in that year changed parties when he cast his ballot for Abraham Lincoln and Andrew Johnson. From 1868-1871 he served as Township Supervisor of Hermon and served on the St. Lawrence County Board of Supervisors. In November 1870 he was elected to his first term in the New York State Assembly and would be returned to that office on three further occasions in 1872, 1873 and 1874. Lynde would chair the assembly committee on Internal Affairs during the sessions of 1872, 1873 and 1874 and in 1873 was a member of the committee on Railroads, Engrossed Bills and State Prisons. During his final term assemblyman Lynde introduced the Compulsory Education Act, a piece of legislation passed by the legislature that required:


"All parents and those who have the care of children shall instruct them, or cause them to be instructed, in spelling, reading, writing, English grammar, geography and arithmetic. And every parent, guardian or other person having control and charge of any child between the ages of eight and fourteen years shall cause such child to attend some public or private day school at least fourteen weeks in each year."

Following a three year absence from the New York political scene, Lynde reemerged as a candidate for the State Senate in 1877, hoping to represent the state's 17th district. That November he would defeat Democratic nominee James McNaughton "by a 5,859 majority." Lynde's first senate term saw him chair the committees on Manufactures and Agriculture and he would win a second term in the senate in November 1879, soundly defeating his Democratic opponent Albert Andrus by a vote of 18,922 to 10,179. 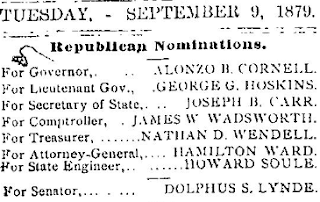 The citizens of Lynde's senatorial district would elect him to a third term in the senate in 1881, and during the 1882-83 term was a member of the finance committee. In the mid 1880s, he and his family removed from Hermon and settled in the neighboring town of Canton. In 1887 he assisted in the founding of the town's First National Bank, serving as its president until January of 1898. A series of "financial reverses" marred Lynde's last years, and just a few days prior to his death had filed for bankruptcy, with his debts being recorded as "over $13,000." Lynde had died on June 30, 1902, just one day before his 69th birthday. His cause of death was attributed to a stroke suffered on the piazza of his Canton home, with death occurring later that evening. He was survived by his adopted daughter Grace and his wife Esther, who died a year short of her hundredth birthday in 1936. The entire Lynde family was later interred at the Evergreen Cemetery in Canton. 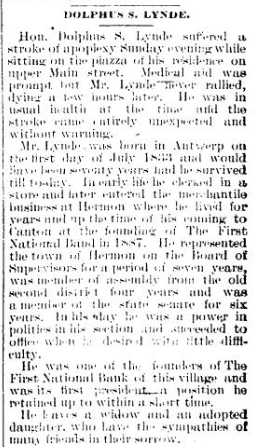 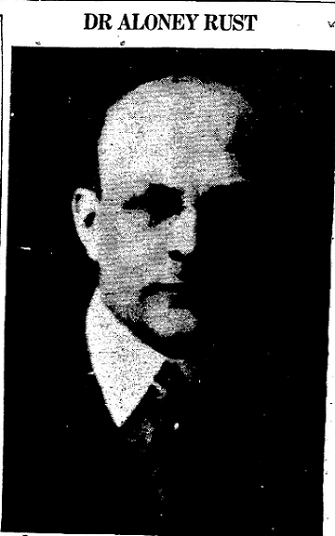 A practicing physician for over four decades in the Franklin County, New York area, Dr. Aloney Lyman Rust was a two time candidate for the New York State Assembly from Franklin County. Born in Chateaugay, New York on September 15, 1876, Aloney Lyman Rust was one of five children born to Dr. Elisha Aloney and Louisa Lyman Rust. His family relocated to the neighboring town of Moira when Aloney was a child and he would go on to attend the Franklin Academy at Malone.
Following in his father's vocation, Rust decided upon a career in medicine and subsequently enrolled at Syracuse University, from which he earned his medical degree in the class of 1900. Shortly thereafter he began work at the St. Joseph's Hospital in Syracuse, but remained here a short time, returning to Moira to take over his father's medical practice. After a short period there Rust removed his practice to the nearby town of Brushton and married here on October 19, 1904 to Litz Dustin (1874-1963), with whom he would have two children, Phyllis (1906-1996) and Gordon E. (1909-1977).
Aloney L. Rust continued the practice of his profession in Brushton for several years, and in 1909 made his first foray into political life, being the Democratic candidate for the state assembly in November of that year. Sadly Rust did not fare well in that year's election, with Franklin County voters electing Republican nominee Alexander McDonald by a majority of 1,300 votes. An electoral result from that contest was published in 1910 New York Red Book and is shown below.

Rust's middle initial is mistakenly given as "W" in this 1910 Red Book electoral result.

Following his rather lopsided defeat at the polls, Aloney Rust removed his practice from Brushton to Malone in 1913. He remained here for the remainder of his life and became widely known throughout that area as:

"A fine example of the old time country doctor. Traveling by horse and buggy, he attended his patients about the countryside, even operating when necessary. He had the distinction of officiating at the first confinement case in the Alice Hyde Hospital."

Nine years following his first assembly candidacy, Aloney Rust reentered the political arena when he was again put up as the Republican assembly nominee from Franklin County. Although he was dealt another loss (losing to Democrat Warren Thayer by a vote of  5,277 to 2,313) one can see the results weren't as overwhelming as they were nine years previously! After this defeat Rust refrained from further assembly candidacies but reemerged on the local political scene in 1937 and 1946 when he was a candidate for Franklin County coroner.
During the 1940s Rust was selected to serve as chairman of the Franklin County Selective Service Board and continued in this role until stepping down because of health concerns in 1950. In 1947 he retired from the active practice of medicine and three years later was honored by the New York State Medical Society for his fifty-year career in the medical field (which, according to his estimation, saw him deliver 1,400 babies!)
Aloney Lyman Rust died at his Malone home on July 1, 1951 at the age of 74. He was survived by his wife and two children and was later interred at the Morningside Cemetery located in Malone. This cemetery is also notable for being the resting place of former U.S. Representative and state senator William Almon Wheeler, who would experience further distinction when he was elected as Vice-President of the United States in 1877, serving under Rutherford B. Hayes. 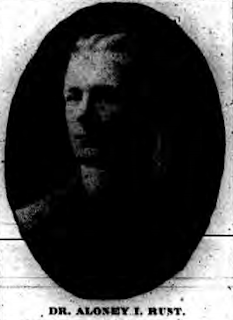 Aloney Rust during the time of his first assembly candidacy.