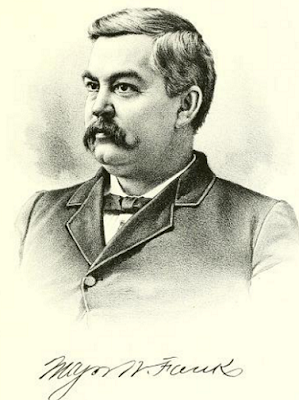 This dapper looking mustachioed man is Major Wetherford Funk, a prominent Harrison County, Indiana attorney during the late 19th century. With a first name that is a bit of a misnomer (he never served in the military and instead has a military title as a first name), Funk is profiled today due to his service as Prosecuting Attorney for Indiana's Third Judicial District in the early 1880s.
Born in Milltown, Indiana on October 29, 1849 to Virginia parentage, Major Wetherford Funk was the son of Reuben and Lucinda Spencer Funk. His education occurred in the common schools of Crawford County, Indiana and during his youth also worked the family farm. At age 17 he began a brief stint as a school teacher. He would later put that work on hold and enrolled at the University of Indiana at Bloomington, graduating from that school's law department in the class of 1875.
In the year following his graduation, Major W. Funk married to Annice Carolyn Wyman (1859-1919), a resident of Martinsburg, Indiana. The couple would set up a home in the Harrison County town of Corydon and later had one daughter, Fannie, born ca. 1879.
Major W. Funk was admitted to the Indiana bar in Corydon and soon after entered into the practice of law. He continued in private practice until 1882 when he was elected as Prosecuting Attorney for Indiana's 3rd Judicial Circuit. He would win re-election to that office two years later and prior to his stepping down in 1886 was remarked to have displayed:

"The gift of oratory and natural and acquired ability as a lawyer that he is so well known to possess; often times in the important criminal cases of that period being pitted alone against the ablest advocates of the district and the state, but always fearless in the discharge of his official duty, able in debate, resolute and courageous in action, has been unusually successful in the prosecution of criminals."

After leaving the post of Prosecuting Attorney Funk returned to private practice and in the late 1880s was talked of as a potential candidate for Circuit Judge for Indiana's Third Judicial Circuit. Little is known of the remainder of Funk's life, excepting notice of his death in Corydon on August 2, 1917. His wife Annice survived her husband by only two years and was interred alongside him at the Ceder Hill Cemetery in Corydon.
Posted by Andy Osterdahl at 3:33 PM 0 comments 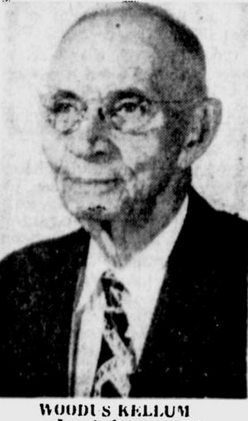 An attorney and Democratic political figure in New Hanover County, North Carolina, Woodus Kellum practiced law for over five decades and was elected to two terms in the North Carolina General Assembly from the aforementioned county. A fourteen-year tenure as Solicitor for North Carolina's Eighth Judicial Circuit followed Kellum's assembly service, and after retiring from the latter office returned to practicing law.
The son of Wilson Tomas (W.T.) Kellum and the former Nancy Humphrey, Woodus Kellum was born in Kellum, North Carolina on January 16, 1878. He would attend school in Onslow County and also studied at the Rhodes Academy at Trenton. Kellum relocated to Wilmington, North Carolina in 1900 and for a time was employed as a motorman for the Consolidated Street Railway Co. in that city. In the year following his resettlement, Kellum joined the Wilmington Fire Department and also took up the study of law during this time.
Woodus Kellum was admitted to the state bar in 1903 and in October of the following year married to Christian Horne (1883-1963). The couple was wed for nearly sixty years and their lengthy union saw the births of two daughters, Madeline (1906-1990) and Chloris (1908-2003).
In August 1903 Kellum was admitted to the North Carolina bar and was later a senior member of the Wilmington based law firm of Kellum and Loughlin. In 1910 Kellum won election to the North Carolina General Assembly and during the 1911-13 session served on the house committees on the Judiciary (No. 2), Military Affairs, Oyster Interests, and Constitutional Amendments.
Reelected to the house in November 1912, Woodus Kellum was named to a number of new committees during the 1913-15 term, those being Courts and Judicial Districts, Election Laws, Finance, Fish and Fisheries, Judiciary No. 1 and the Regulation of Public Service Corporations. He would chair the committee on Private and Public-Local Bills and was also a member of the joint committees on Revision of the Laws and Trustees of the University. Kellum's legislative tenure also saw him be a prime mover in legislation that aided in establishing the New Hanover County Recorder's Court, the Consolidated City-County Board of Health and the consolidated New Hanover County school system.
Following his two assembly terms, Woodus Kellum served fourteen years (1920-1934) as solicitor for North Carolina's Eighth Judicial District, which comprised the counties of New Hanover, Pender, Brunswick and Columbus. He retired from that post in 1934 and returned to private practice, being a member of the firm of Kellum and Humphrey (his partner being his son-in-law George Dudley Humphrey.) 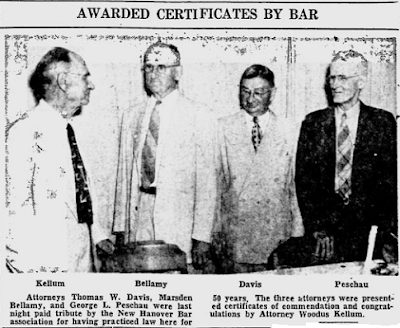 Woodus Kellum, from the June 22, 1950 edition of the Wilmington Star-News.

Active in several non-political areas in his native county, Kellum was a past president of the New Hanover County Bar Association and had previously served as chairman of the city's board of education. In 1906 Kellum began a near six decade long connection with the People's Savings and Loan Association of Wilmington. A charter director of that association upon its organization in 1906, Kellum would occupy the posts of vice-president and attorney, and in a 1956 write up on the fiftieth anniversary of its founding, is recorded as a "senior director in service." He would serve as a vice president of the group until his death.
Woodus Kellum died in Wilmington on January 17, 1963, one day after his 85th birthday. His wife Christian survived her husband by only a few months, dying in October of that year. Both were subsequently interred at the Oakdale Cemetery in Wilmington.
Posted by Andy Osterdahl at 3:16 PM 0 comments 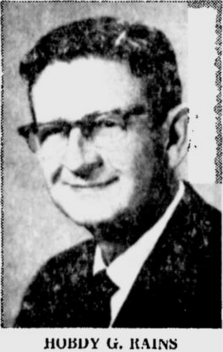 Gadsden, Alabama resident Hobdy Greer Rains distinguished himself in a number of civic and political endeavors in his native city, being an attorney, bank director and Democratic Executive Committee chairman. He earns a place here on the site due to his service as a delegate to the 1952 Democratic National Convention, as well as for his tenure as Judge of the Etowah County Circuit Court.
Born in DeKalb County, Alabama on March 29, 1912, Hobdy Greer Rains was the son of Will Green and Ola Hamrick Rains. The Rains family resettled in Gadsden in 1916 and Rains' early education occurred in the schools of that county. He briefly studied at Stamford University in Birmingham before enrolling at the University of Alabama, where he earned his bachelor of laws degree. Shortly afterward he would join his uncle Albert McKinley Rains (later to be a ten-term U.S. Representative from Alabama) in the law firm of Rains and Rains.
Hobdy G. Rains married in 1945 to Constance Novetta Goldman (1924-2005). The couple were wed for over forty years and would remain childless. Long active in Democratic Party proceedings in Alabama, Rains served as part of the Alabama delegation to the 1952 Democratic National Convention in Illinois that nominated Adlai E. Stevenson for the Presidency.
In addition to his service as a delegate, Rains was a longtime member of the Alabama State Democratic Executive Committee and was its secretary for twenty-eight years. In 1960 he advanced to the State Democratic Steering Committee and prior to his appointment had been selected as one of three attorneys to conduct voter fraud hearings in Phenix City, Alabama in connection with the assassination of Albert Patterson (1894-1954), the Democratic nominee for Alabama Attorney General.  Rains would also hold the directorship of the First City National Bank in Gadsden upon its admission to the Federal Reserve System in 1966.
Rains continued service on the Democratic Executive Committee into the mid-1970s and in August 1976 was appointed as judge of the Etowah County Circuit Court. He entered into his duties on August 22nd of that year and served until his retirement in 1983, whereafter he held the position of supernumerary judge for the Etowah County Circuit for a short period. Hobdy Greer Rains died in Gadsden on April 18, 1988 at age 76. He was survived by his wife Constance, who, following her death in 2005, was interred alongside her husband at the Forrest Cemetery in Gadsden. 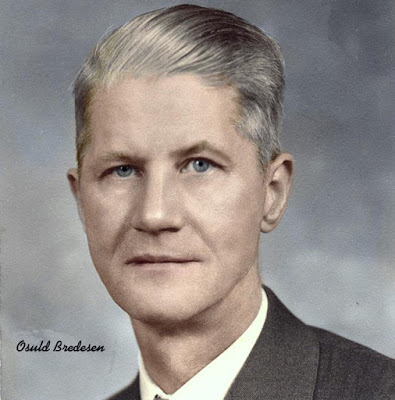 For many years a distinguished figure in the city of Manitowoc, Wisconsin, Osuld Torrison Bredesen was a decorated veteran of the First World War who served as Judge of the Municipal Court of Manitowoc for fifteen years. Born in Stoughton, Wisconsin on August 16, 1893, Osuld T. Bredesen was the son of the Rev. Adolph (1850-1913) and Inanda Torrison Bredesen (1857-1914). Bredesen would inherit his unusual first and middle names courtesy of his maternal grandfather Osuld Torrison (1828-1892), a prominent merchant in the early days of Manitowoc.
Osuld T. Bredesen removed with his family to Manitowoc in 1911 and was later employed by the O. Torrison Co. as a credit manager. A veteran of the U.S. Marine Corps Second Division during WWI, Bredesen was wounded in action at the Battle of Belleau Wood in June 1918. His injuries proved so severe he was unable to return to active duty, and he was subsequently hospitalized at Camp Barry in Great Lakes, Illinois. During this period of recuperation Bredesen married to Mary Estelle "Stella" Engeldinger (1897-1985) in April 1920. The couple were wed for nearly forty years and became the parents to five children, including Robert Louis Bredeson (1921-1978).
Following his military service, Bredesen studied at the Luther College in Decorah, Iowa for a short period before resuming his studies at the Marquette University Law School. He graduated with his law degree in the class of 1924 and shortly thereafter removed to Manitowoc to establish his law practice. He continued in this practice until his election as Judge of the Municipal Court of Manitowoc in April 1933, having been elected to the bench following the retirement of Albert H. Schmidt, who had served as judge for nearly three decades.
Entering into his duties in May 1933, Bredesen served on the bench until his retirement in 1951. After leaving office Bredesen and his wife removed to Venice, Florida, where they resided until returning to Manitowoc a year prior to Osuld Bredesen's death, which occurred at the Maplecrest Sanitarium in Whitelaw, Wisconsin on November 10, 1958. He was survived by his wife Stella, who, following her death in 1985, was interred alongside her husband at the Evergreen Cemetery in Manitowoc.
Posted by Andy Osterdahl at 4:32 PM 0 comments