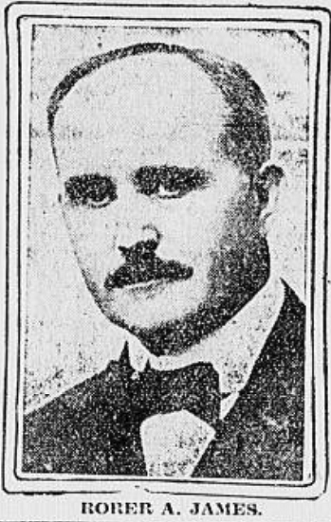 Portrait from the May 21, 1916 edition of the Richmond Times-Dispatch.

Following June's monthlong sojourn through West Virginia, we journey to that state's Southeastern neighbor to profile Rorer Abraham James, a member of both houses of the Virginia legislature who in 1920 was elected to a term in the U.S. House of Representatives. Unfortunately, James died a year into his term, bringing to end a noteworthy political career that is sadly forgotten today. The son of Dr. John Craghead and Angeline (Rorer) James, Rorer Abraham James was born in Pittsylvania County, Virginia on March 1, 1859.
Bestowed his unusual first name in honor of his mother's maiden name, young Rorer received his education at home under private tutors and also attended the Roanoke College. He later enrolled at the Virginia Military Institute (graduating in 1882), and after deciding on a career in law entered into the University of Virginia's law department, graduating with the class of 1887. James would remain connected to the Virginia Military Institute for many years following his graduation, serving a ten-year tenure on the university's board of visitors, four of which were as chairman of the board.
After receiving his law degree James established roots in Danville, where he would practice law and first entered into politics in 1888 when he won election to the first of two terms as a member of the Virginia House of Delegates from Pittsylvania County. James' two terms (1889-1893) saw him sit on the committees on Schools and Colleges, and Banks, Currency, and Commerce, and in 1892 was elected to the state senate, where he would serve for eight years. James' time in the Senate saw him named to the committees on Agriculture, Mining and Manufacturing, Enrolled Bills, General Laws, Public Institutions and Education, and Public Printing.
Rorer A. James married on October 12, 1892, to Annie Marshall Wilson (1869-1938). The couples near three-decade marriage would see the births of four children, Robert Wilson (1893-1953), Ruth (died in infancy in 1895), Rorer Anderson (1897-1937), John Bruce (1905-1939). Of these children, Rorer Anderson James followed his father into public life,  succeeding him as publisher of the Danville Register and Bee after the latters death in 1921.
While still an incumbent state senator Rorer James added the title of newspaper owner to his resume when in 1899 he purchased the Danville Register for $5,500. Soon after assuming stewardship of that paper, he laid plains to increase its circulation, page length and price (raising it from five to six cents), and in May 1900 purchased a second paper, the Danville Daily Bee. James maintained ownership of both these papers until his death in 1920, and had "with untiring energy and sound judgment, raised to the front rank of Virginia journalism." 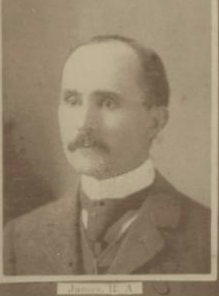 Rorer A. James as he appeared on the 1899-1900 Virginia state senate composite.

With his name firmly established in politics and journalism in Virginia, Rorer James' career in public life continued to rise through the early 1900s, serving as part of the Virginia delegation to the Democratic National Conventions of 1904 and 1912, and in 1908 was a Democratic presidential elector for his state. For a number of years, James held the chairmanship of the Fifth congressional district's Democratic committee and at the 1920 Democratic state convention in Roanoke was elected as chairman of the Virginia Democratic State Central Committee.
1920 proved to be a significant year for James in addition to his election as state Democratic chairman, as he also served as a delegate at large to the Democratic National Convention that year that saw Ohio Governor James M. Cox nominated for the presidency. That same year also saw the resignation of Virginia congressman Edward Watts Sanders, who had represented James' district in the U.S. House of Representatives since 1906. As luck would have it, Rorer A. James was the man elected to the vacant congressional seat, and filled out the remainder of Sander's term, entering into his duties on June 1, 1920.
As 1920 was an election year, James found himself in campaign mode through the latter part of the year, and in that year's congressional race was opposed by Republican nominee S. Lloyd Landreth. On November 2, 1920, it was James who emerged triumphant at the polls, besting Landreth by a vote of 15, 567 to 11, 109. Having been elected to a full term of his own in Congress, James began the 1921-22 session by being named to the house committee on the Post Office and Post Roads, and in the summer of 1921 had returned to Danville for a brief visit home. While at his home alone on August 6th, James began experiencing the symptoms of a heart attack and phoned his brother, Dr. R. Bruce James, for aid. By the time of Bruce James arrival at his brother's home, Rorer A. James was dead, having succumbed to a heart attack on the steps near his bedroom.
The death of the incumbent congressman was front page news in a number of Virginia newspapers, and many of Virginia's leading Democratic politicians gave personal reminiscences of James in newspapers issued in the days following James' death. Amongst these was the testimonial of Judge William F. Rhea, a personal friend of James, who remarked:

"As chairman of the state Democratic Committee, he was, at all times, an agressive fighter. He was ever loyal to his friends and always could be counted on to put forth his best efforts in behalf of the party and to fight to the finish for what he believed was right. He was a mighty fine man; I knew him well. He was loyal and true."

Rorer A. James was survived by his wife Annie and three of his children, all of whom were interred alongside him at the Green Hill Cemetery in Danville. 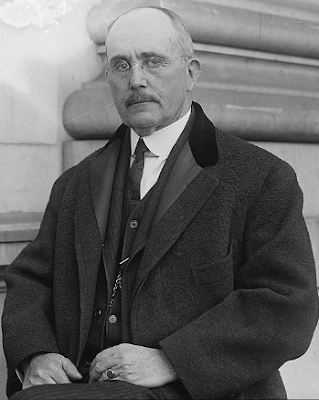 Rorer A. James during his congressional term.