Portrait from "The History of Bristol County, Massachusetts", 1883.
Bristol County, Massachusetts resident Handel Napthali Daggett was for over four decades a prominent business figure in said county, being the son of a successful cotton manufacturer. He would follow in his father's stead and established a business devoted to the manufacture of cotton print cloths and mohair braids and would find further distinction as a banker and two-term member of the Massachusetts General Court.
Born and raised in Attleborough, Massachusetts, Handel Napthali Daggett was born on January 27, 1821, one of nine children born to Ebenezer Daggett (1763-1832)  and his wife, the former Sally Maxcy (1778-1867). A member of the Massachusetts state senate at the time of his death, Ebenezer Daggett had been an Attleborough based cotton manufacturer for a number of years, and being the son of a man-of-means, Handel N. Daggett had the benefit of a fine education, attending the public schools in Attleborough, as well as Day's Academy in Wrentham, Massachusetts and the Perkin's Academy of Attleborough.
After completing his education Daggett resided in Boston for a short period and returned to Attleborough, where in January 1844 joined his twin brother Homer Micajah Daggett in forming a cotton print cloth business in the settlement of Falls Village, operating under the firm name of H.N. and H.M. Daggett.  Handel Daggett married his first wife Eunice Whipple Sheppard (1825-1848) in Attleboro in June 1844 and had two children, Josephine Sheppard (born 1845) and Francis Whipple (1847-1854). Following Eunice's untimely death at age 24 in 1848 Daggett remarried in Livonia,  New York to Jane Amelia Adams (1825-1854), with whom he would have a further two children, Eunice Eudora (died in infancy in 1852) and Flora Eugenia (1853-1857). Daggett was widowed for a second time in 1855 with the death of his wife Jane, and a year after her passing remarried to her sister Lucy (1828-1870). This union would see the births of three daughters, Florence Jane (born 1857), Frances Adams (born 1860) and an infant daughter who died soon after birth in February 1856.
The Daggett brother's firm continued until its dissolution in 1855. Handel Daggett would continue in business on his own, eventually purchasing another site in an area called Farmer's Village. Here Daggett would develop a hoop-skirt manufacturing business, which existed until 1860. In the following year, he turned his attention to mohair braids, and would soon establish a factory devoted to their manufacture, being noted as "being the first establishment of its kind in the country". Daggett's braid factory grew to become a truly prosperous business in Bristol County, and with this success, it eventually outgrew its original home. Around 1866 Daggett removed his company to a stone mill located at Attleborough Falls, and with this move came an industrial boom in the area, which was recorded by the National Wool Manufacturer's Bulletin in the following passage:


"There soon arose a model Massachusetts manufacturing village, in which a peaceful and industrious population has learned to look upon Mr. Daggett as the benefactor of a community chiefly created by his energy and business ability." 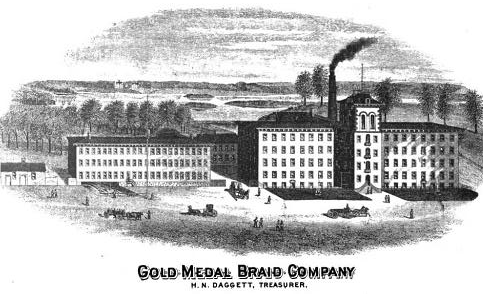 The Gold Medal Braid Company as it looked in the 1870s.

In 1869 Daggett and two investors (Austin Dunham and George S. Moulton) joined together to establish the Gold Medal Braid Company. With $50,000 furnished by Dunham and Moulton as capital, Daggett took the reins of the company, and in 1873 bought out his friends and continued to operate it alone. The company would house fourteen hundred braiding machines (braiders) and employed one hundred and fifty persons. Active in other areas of business life, Daggett served as the director of the Attleborough National Bank, treasurer of the Attleboro Branch Railroad, president of the Industrial Mutual Fire Company of Boston, and the Woolen Manufacturers Mutual Fire Insurance Company, also located in Boston. 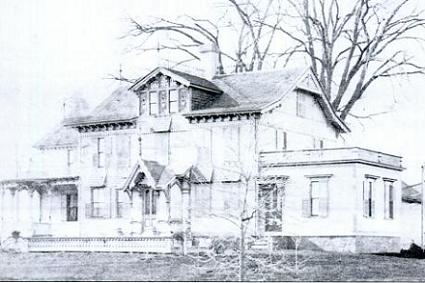 On May 23, 1870 Lucy Frost Adams died at age 42, leaving Handel Daggett as a widower for the third time in his life. In November 1875 he married his fourth wife, Annie Merritt Parsons (1842-1898) and one daughter was born to the couple, Blanche (1879-1967).
Beginning in the late 1840s Daggett made his first move into local political office in Attleborough, serving at various times as town selectman (from 1849-1850 and 1861-1862), clerk (1848-1851) and assessor. He was elected to represent Bristol County in the Massachusetts State House of Representatives in November 1863 and served during the legislative session of 1864, holding a seat on the committee on manufactures. He won a second term in the house in 1883 and during the 1884 session served on the house committee on the Library.
Daggett continued to be involved with his business concerns until his death, and at the time of his passing was serving as the director of both the North Attleborough National Bank and the First National Bank of Pawtucket, Rhode Island. He died of "disease of the heart" on February 27, 1894 at his North Attleborough home, a month after celebrating his 73rd birthday. Following his death, The Gold Medal Braid Company underwent a name change to the Standard Braid Company, and later the International Braid Company, until its closing in 1941. Daggett was survived by his fourth wife Annie, who died in 1898, and both he and three of his wives were interred at the Mount Hope Cemetery in North Attleborough. 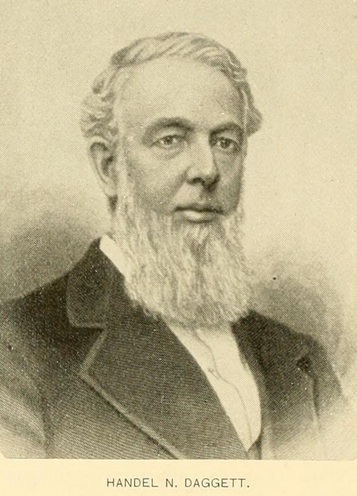 Handel N. Daggett, from the "One of A Thousand" biographical series, 1890.
Posted by Andy Osterdahl at 12:30 PM