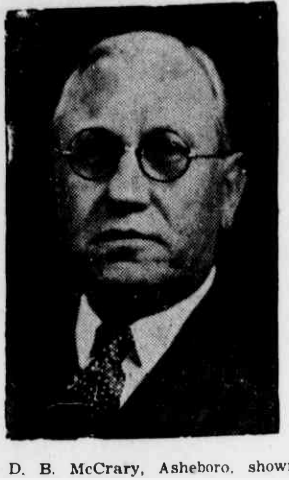 Multi-term Asheboro, North Carolina mayor Doctor Bulla McCrary received passing mention in the article on his mayoral predecessor, Chisholm Clark Cranford, and, like Cranford, had a considerable impact on Asheboro with his being a textile industrialist and head of the city government. Resettling in Asheboro in the late 19th century, McCrary's near five-decade residency in the city saw him as an owner of the Acme Hosiery Mills and the Sapona Manufacturing Company, and with his increased business successes through the early 20th century gained additional repute as a philanthropic benefactor, his generous contributions helping to construct the Randolph Hospital. McCrary returned to government service late in his life as a member of the State Highway Commission and was designated as acting chairman in 1941 and 1942-43.
Born on April 11, 1875, in Trinity, Randolph County, North Carolina, Doctor Bulla McCrary was the son of William Franklin (1841-1918) and Frances Evangeline (Briles) McCrary. Endowed with a name that is a misnomer, McCrary wasn't a physician and had no medical background whatsoever! Referred to by most period sources under the initials "D.B.", McCrary's unusual first and middle names may be connected to two locally prominent physicians residing in Randolph County, Dr. Archibald C. Bulla (1820-1895) and Dr. Alexander Bulla (1825-1901). Both of those men engaged in medical practice in that county for many years and are likely candidates for being the namesake of the man profiled here.
During his youth D.B. McCrary was a student at Guilford County's Oak Ridge Insitute in 1890 and later went on to study at the Trinity College. He resettled in Asheboro in 1898 and within a short period entered into his first business venture, partnering with Thomas H. Redding to form a hardware store and farm implement dealership. In 1901 McCrary married Allie Walker (1877-1944), and the couple's four-decade union produced two sons, Charles Walker (1902-1984) and James Franklin (1907-1979).
After several years of work in the hardware trade, McCrary and Redding set about furthering their business standing in the community, and in 1907 McCrary became one of seventeen businessmen that founded the Acme Hosiery Company, which would become a manufacturer of cotton socks and women's stockings. The company was incorporated as the Acme Hosiery Mills in 1908 and in January 1909 McCrary was selected as its first president, with Chisholm C. Cranford, the future Asheboro mayor, serving as vice president. Later in that year, McCrary and Redding, after pooling resources with Asheboro banker William J. Armfield Jr., purchased the Acme Hosiery Mills. This business would prove successful and in February 1916 the trio incorporated the Sapona Cotton Mills to further augment their supply of cotton yarn. This purchase, which included the Cedar Falls Manufacturing Co.'s plant, also comprised "4,800 spindles and 100 looms" and later led to the construction of "two-story additions" at the Asheboro factory, and less than a decade after its founding, the business could boast of a daily output of over forty-thousand stocking pairs.
Following Thomas Redding's death in 1918 McCrary and Armfield continued to head the Acme Hosiery Mills, and during this period advanced into a number of other non-textile areas, including the posts of president (McCrary) and secretary (Armfield) of the Bank of Randolph at Asheboro. McCrary would further add to his business resume with his time as president of the Armfield-Laughlin Realty Co., being a charter member of the Asheboro Chamber of Commerce, a founder of the city's first building and loan association, a stockholder in the Raeford Hardware Co., and in the late 1930s was secretary-treasurer of the Asheboro Grocery Company. Having achieved success in multiple endeavors in Asheboro, McCrary built and resided in the picturesque estate shown below, which was completed in 1905. 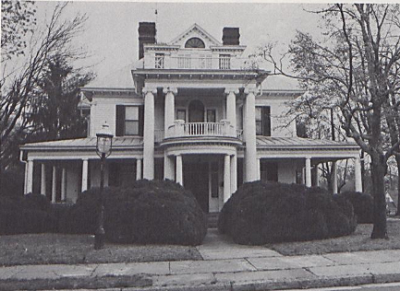 McCrary's home in Asheboro, from the 1985 "Architectural History of Randolph County."

By the early-1920s, the name of D.B. McCrary had been cemented amongst the leading industrialists of the Old Dominion State, and through that decade continued his rise through the state's textile industry. In 1924 McCrary saw a three-story addition to the Acme Hosiery plant completed, comprising "fine gauge circular knitting machines." In that same year, the Acme Hosiery Company and the Sapona Cotton Mills employed a total of 400 workers between them and are recorded as having "generated $300,000-worth of cotton and rayon stockings."
McCrary would again expand his business territory in 1927 with the establishment of the McCrary Hosiery Mills, a two-story steel frame structure that would manufacture full-fashioned silk stockings. Further expansion followed in 1931 when the Acme Hosiery Mills purchased the nearby Parks Hosiery Mill, and seven years later increased its spread with construction beginning on a plant in the neighboring town of Ramseur. Fifteen years following D.B. McCrary's death in 1946, the Acme Hosiery Mills and the McCrary Hosiery Mills merged to form the Acme-McCrary Corporation in March 1961. This business still continues today, although its manufacturing assets were purchased by a Sri Lankan based company in 2017. 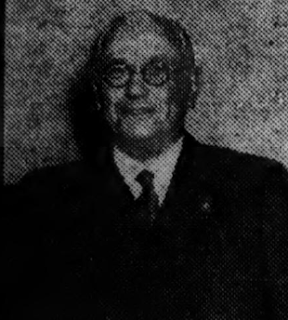 While McCrary's numerous business endeavors remain the focal point of his prominence in Asheboro, his time in the political arena is also an integral part of his overall story. He began his career in local politics with his election to the Asheboro board of aldermen in the early 1910s, and by 1915 was serving as the chairman of that board. In June of that year mayor Chisholm Clark Cranford, who'd recently been elected to a second term, presented his resignation, and, under the Asheboro town charter, board chairman McCrary succeeded to the mayoralty. McCrary served out the remainder of Cranford's term and in 1917 was elected to a term of his own which concluded in 1919. This four year spread as mayor saw Asheboro employ its first town constable, and in a January 1918 edition of the Asheboro Courier McCrary authored a lengthy write-up on his city's positive attributes, highlighting Asheboro's businesses, schools, churches, improved sewer lines, water systems, roadways, and tax rate. After noting that his mayoralty was a "live, business-like administration", McCrary further related that:

"With 3,000 happy and prosperous people; with an ideal climate; with abundant and good water; with fine streets and side walks; with our big schools, churhces and factories, two big railroads and fine back country, the garden spot of the south, we believe we have a bright future. If you live here, we ask you to help us realize this wish. If you do not live here we extend to you a most cordial invitation to come see us and we'll prove to you that Asheboro is a good place to call home."

D.B. McCrary's second term as mayor concluded in August of 1919, and on August 14th honored the members of his administration, along with the Asheboro Fire Company, with a banquet held at the city's Ashlyn Hotel. In 1925 McCrary was returned to the mayoral chair by the Asheboro citizenry and during the 1925-27 term, the city saw a bond "issued for water, street and sidewalk improvements" as well as the creation of a second city lake.
Long an advocate of improved roadways in his state. D.B. McCrary returned to government service in 1937 when he was appointed by Governor Clyde Hoey as a member of the State Highway Commission. Named for a six-year term as commissioner for the sixth district, McCrary's office comprised the counties of Chatham, Davidson, Harnett, Hoke, Lee, Madison, Moore, Randolph, Robeson and Scotland. He would be reappointed to the commission by Governor J. Melville Broughton and on two occasions served as acting chairman of the commission, and "declined to accept the chairman's salary" during his time in that post.

McCrary's second stint as acting chairman extended from December 1942-December 10, 1943, when he resigned from the commission, citing "his duties at home and his own business affairs." Active in church work and philanthropy in Randolph County, McCrary was a leading financial booster in the development and completion of the Randolph Hospital. Upon his death in 1946 McCrary left a substantial bequest to the hospital for its expansion and upkeep and later was honored by having the D.B. McCrary wing named after him. Widowed in September 1944, Doctor Bulla McCrary survived his wife Allie by a little over two years, dying on October 28, 1946, at age 71. He was survived by his sons Charles and James and later was entombed at a mausoleum at the Asheboro City Cemetery. Political service would continue in the McCrary family with D.B. McCrary's son James Franklin, who was elected to two terms as mayor of Asheboro, serving from 1949-1953. 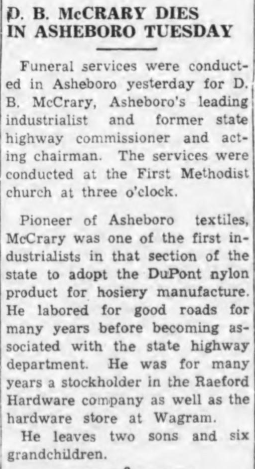 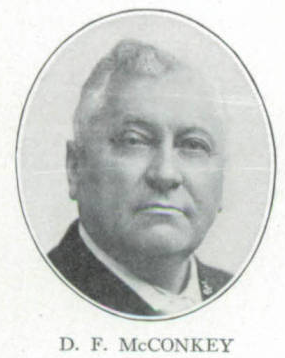 In a January 29, 2020 update to this article, another political officeholder named "Doctor" has been found--Doctor Franklin McConkey of Taney County, Missouri. Like Doctor Bulla McCrary before him, McConkey was given the title Doctor as his given first name and was never a medical practitioner. A two-term member of the Missouri House of Representatives from Taney County, McConkey was born in Vandalia, Illinois on July 29, 1861, the son of George and Sarah (Lee) McConkey.
McConkey's formative years were spent on his father's farm and would attend the public schools in his region. In his early twenties, he removed to Iowa to follow a teaching career and in 1885 permanently resettled in Forsyth, Taney County, Missouri. In 1887 he took work in the Taney County clerk's office and began reading law in the late 1880s. Following his passing the state bar exam in 1891 he established himself in practice in Forsyth, and also built up a prosperous farming and ranching career. He married in 1900 to Kate Smith (1866-1956) and later had four children, Maggie, Kate, George, and Forest G.
Doctor F. McConkey began his political career when he was named U.S. Postmaster at Forsyth, serving in that capacity from 1897-1904. In April 1907 he won a special election for the Missouri House of Representatives, this special election being occasioned by the death of sitting representative J.M. Depuy. During the 1907-09 session, McConkey held an unknown number of committee assignments and later was appointed to a term as prosecuting attorney for Taney County due to the resignation of J.C.L. McKnight. 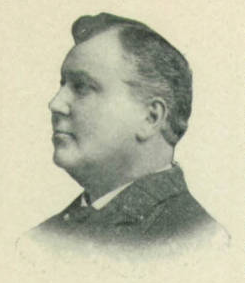 McConkey returned to politics in 1920 with his reelection to the Missouri legislature and during the 1921-23 session chaired a special committee "to investigate the feasibility of the establishment of a state printing and binding plant." This term also saw him sit on the committees on Constitutional Amendments, the Judiciary, and Redistricting. McConkey continued residence in Forsyth following his term and died on July 12, 1938, shortly before his 77th birthday. He was survived by his wife Kate and both were interred at the Sapp Cemetery in Forsyth.
Posted by Andy Osterdahl at 1:27 PM