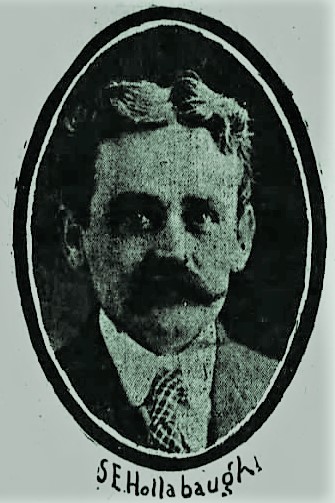 Marshall, Arkansas received mention in the January 21st write up on Raz Myatt Ferguson, a two-term state representative from that town. Interestingly, three decades prior to Ferguson's election to the legislature that same town was represented by another curiously named man, Shem Easley Hollabaugh. A two-term representative, Hollabaugh was a merchant, educator and newspaper publisher in Searcy County and also made inroads into that county's financial sector, being a bank director and incorporator. The son of Emanuel Fountain (1840-1936) and Frances Anah (Hatchett) Hollabaugh, Shem Easley Hollabaugh was born in Leslie, Arkansas on August 20, 1869. Bestowed the unusual name Shem upon his birth, Hollabaugh's first name is of biblical origin, "Shem" being one of the sons of Noah recorded in the Hebrew Bible.
A student in schools local to Marshall, Hollabaugh was a graduate of the Marshall High School and attended the Valley Springs Academy. Following the completion of his schooling he began a teaching career that extended several years and during the mid-1890s took on an additional post, that of county examiner, an office that saw him have "virtual charge of the educational work of the county, encouraging the grading of schools wherever found possible." This time period also saw Hollabaugh branch into newspaper publishing, being editor and publisher of the Marshall Republican, which had been established in 1890.
Shem Easley Hollabaugh married on his 27st birthday in 1896 to Theodosia Albertine Sanders (1879-1979) and later had eight children, Gladys (1897-1969), Shem Ernest (1898-1977), Ralph (died in infancy in 1901), Ziff Emanuel (1905-1985), Wilbur (1908-1987) Everett (1910-1913), Marcus (1913-2006) and Simpson Buchanan (1920-1943).
In the years following his time as county examiner Hollabaugh briefly served as Searcy County deputy sheriff and entered the business life of Marshall when he and a partner formed the mercantile firm of Sooter and Hollabaugh. This was followed by another mercantile business, Hollabaugh and Schultz, in the early 1900s and in addition to those firms "owned other good property" in Marshall and also dabbled in fruit growing and farming. Hollabaugh added the title of bank director to his resume with his connection to the Marshall Bank and was a founding organizer of the Farmer's Bank (subsequently renamed to the Searcy County Bank).
A member of both the Marshall city council and the local school board, Hollabaugh achieved his first significant political post when he was appointed by President William McKinley as U.S. Postmaster at Marshall, an office he continued to fill until his resignation in 1906. Deciding to seek a seat in the Arkansas House of Representatives in that year, Hollabaugh won the election that November and during the 1907-09 session proved to be busy as a freshman Republican legislator, serving on the committees on Mines and Mining, Public Printing, and Roads and Highways. Hollabaugh's legislative tenure received extensive mention in the 1911 Historical Review of Arkansas, which details that:

"He was secretary of the good roads committee and ably agitated the subject of systematic improvement in the thoroughfares of the state as an aid to the business and happiness of the rural populace, as well as to travelers in general. He also urged the appropriation of additional funds for educational purposes and also introduced a bill in the interest of pure drugs and foods, but some of the measures he advocated seemed to be in advance of public sentiment and did not become laws."

After the completion of his term in 1909 Hollabaugh served as a delegate to the Good Roads Convention held in Little Rock, and in that year saw his brother Fountain Gardner Hollabaugh (1864-1930) elected as a Democrat to the Arkansas House of Representatives. In 1916 Hollabaugh was an incorporator of the Searcy County Hardware Company. Long a leading Mason in Searcy County, Hollabaugh was a member of the Grand Lodge of Arkansas and for several years was its deputy grand master.
Shem E. Hollabaugh was elected to a second term in the Arkansas legislature in August 1930 and served during the 1931-33 session. Little is known of the remainder of his life, excepting note of his death in Arkansas on February 8, 1957, aged 87. His wife Theodosia survived her husband by over twenty years, and following her death at age 99 in January 1979 was interred at the East Lawn Cemetery in Marshall, the same resting place as that of her husband.

Posted by Andy Osterdahl at 1:40 PM